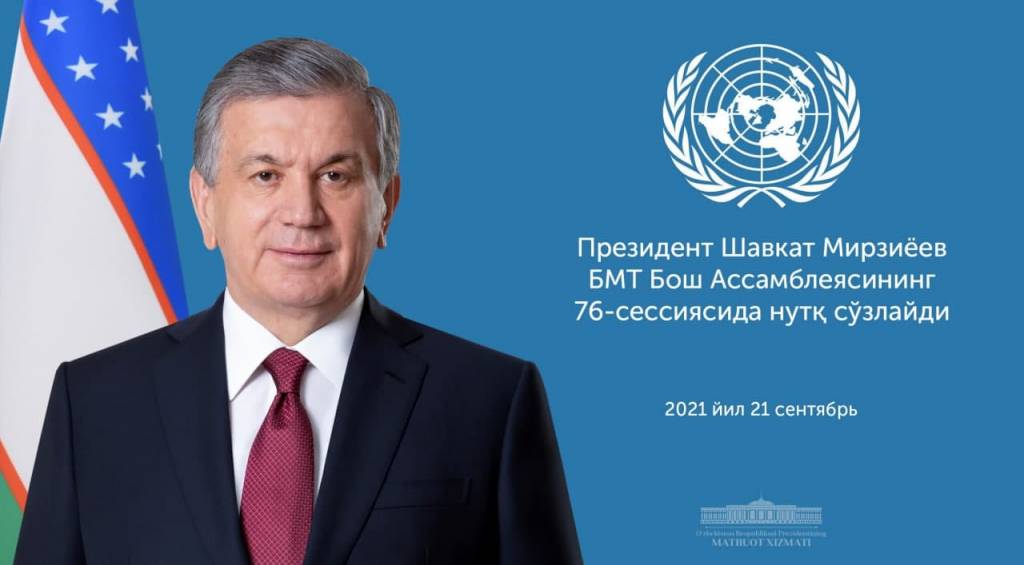 On September 21, President of the Republic of Uzbekistan Shavkat Mirziyoyev will address the High-Level General Debate at the 76th Session of the United Nations General Assembly.

The President of Uzbekistan will present to the international community his vision of current issues on the regional and global agenda, the role of the United Nations in a consolidated response to modern threats and challenges, as well as reveal the essence of deep democratic reforms carried out to build a New Uzbekistan, which have become irreversible.

In the speech of the President of Uzbekistan, taking into account the topics of the discussions, the issues of the joint overcoming of the socio-economic consequences of the COVID-19 pandemic based on the principle proclaimed by the UN “leaving no one behind” will be considered.

It is expected that the President of the Republic of Uzbekistan will put forward several important initiatives aimed at strengthening peace and security, restoring the world economy, ensuring sustainable development, deepening dialogue in the region and at the global level, promoting human rights and freedoms, as well as combating such transnational challenges as climate change, environmental degradation and biodiversity, the drying up of the Aral Sea.

It should be noted that all the initiatives put forward in the speech of the President of Uzbekistan at the 75th Session of the UN General Assembly in September 2020 have received broad support from the world community and are now being implemented.

In particular, measures to effectively counteract the pandemic are supported within the framework of their implementation. Uzbekistan has developed a Code of Voluntary Commitments of States during pandemic, the text of which has been distributed as an official document of the UN General Assembly as Uzbekistan’s contribution to global efforts in this direction.

In May 2021, the UN General Assembly adopted a special resolution declaring the Aral Sea region a zone of environmental innovations and technologies. The Multi-Partner Human Security Trust Fund for the Aral Sea Region, established under the auspices of the United Nations, carries out fruitful activities.

Last week, International Cultural Forum “Central Asia at the Crossroads of World Civilizations” was organized in Khiva jointly with UNESCO.

In November 2021, an international conference is planned to be held in Tashkent on the results of the implementation and prospects for cooperation within the framework of the Joint Plan of the Central Asian States for the Implementation of the Global Counter-Terrorism Strategy.